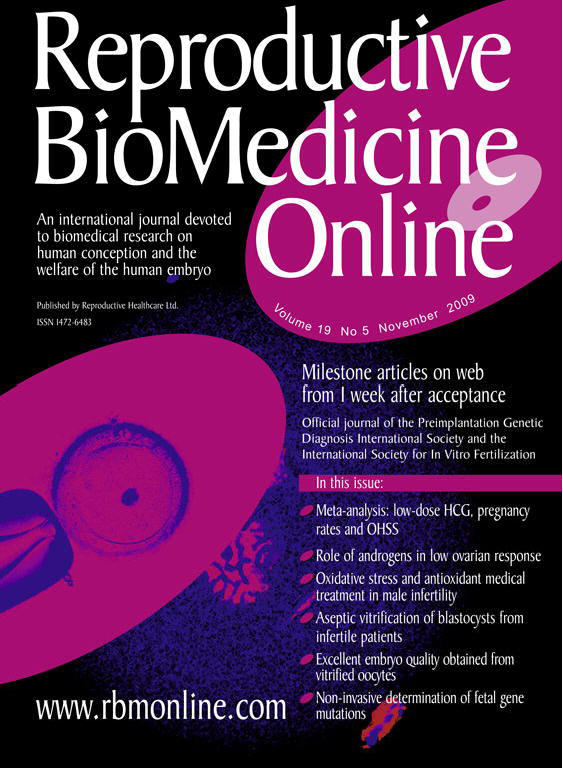 This article appeared in a journal published by Elsevier. The attached

copy is furnished to the author for internal non-commercial research

and education use, including for instruction at the authors institution

and sharing with colleagues.

Other uses, including reproduction and distribution, or selling or

licensing copies, or posting to personal, institutional or third party

article (e.g. in Word or Tex form) to their personal website or

regarding Elsevier’s archiving and manuscript policies are

Aseptic vitrification of blastocysts from infertile

patients, egg donors and after IVM

After graduating in biotechnology and biochemistry, Pierre Vanderzwalmen entered the field

of embryology in 1978 in the Veterinary Faculty of the University of Liege, Belgium. He then

joined the team of Dr Massip, developing vitrification techniques. In 1989, he moved to the

Schoysman Infertility Management Foundation where he spent 14 years, during which time

the laboratory obtained the first TESE baby. At present, he is coordinating the scientific IVF

CHIREC, Belgium. His current research interests focus on vitrification of oocytes and

embryos, on selection of spermatozoa and embryo culture techniques.

During embryo vitrification, it is advisable that cooling and storage should occur in a carrier device in which there is

complete separation of the embryos from liquid nitrogen to ensure asepsis. The consequence of a reduction in the

intracellular concentrations of cryoprotectants without inducing a toxic effect. Blastocysts originating from couples

of the open hemi-straw plug device. A total of 120 aseptic vitrification/warming cycles were performed in group 1, 91

in group 2 and 22 in group 3. Survival rates before embryo transfer, ongoing pregnancy and implantation rates were

In spite of reduced cooling rates due to aseptic vitrification conditions, a three-step exposure to cryoprotectant solutions

Vitrification is a cryopreservation procedure by which solutions

are converted into a glass-like amorphous solid, free

of any crystalline structures. After the initial application

of vitrification to cleaving embryos (

to increase significantly the cooling and warming rates from

of lethal ice-crystal formation in the crystalline

) in a way to allow a direct contact of the biological

sample with liquid nitrogen in order to permit cooling of

where cells are captured in an amorphous state.

Under such ultra-rapid cooling conditions, a vitrified state

is obtained even if embryos are exposed for only a very

short period of time to high concentrations of the cryoprotectant

solutions. This allows the extraction of intracellular

water while limiting the amount of cryoprotectant permeating

into the cells. During the warming process, the open

embryos into a diluting solution. In this way, extremely

the recrystallization phenomenon avoided. Most publications

on the clinical application of ultra-rapid vitrification

have mainly focused on the blastocyst stage (

Although satisfactory results were reported, one major

drawback to the ultra-rapid cooling process is the possible

risk of bacterial as well as viral contamination of the biological

sample during the cooling process as well as during

the question of contamination during storage in liquid

a European Parliament directive on tissues and cells

), has defined medical safety requirements for

the cryopreservation of human cells. In view of the issues

raised by this directive, it was imperative to revise this study

ensuring total protection and isolation of the sample

from the liquid nitrogen during the cooling procedure as

well as during long-term storage

been developed to vitrify mice and human oocytes and

biological material from liquid nitrogen. In the first report,

after vitrification of blastocysts in an open (53% with the

Cryotop device) and in a closed system (51% with

the Cryotip device). Nevertheless, in a more recent paper,

the superiority of the open Cryotop system was recognized

Kuwayama, 2007). At present, the clinical application of

with the Cryotop device is still the method of choice

in the majority of assisted reproduction laboratories.

results after vitrification of human blastocysts in closed

obtained. Out of 43 transfers, clinical pregnancy and implantation

relating to the heat-insulating barrier, which dramatically

Since the probability of fixing the intracellular parts into a

and the concentration of cryoprotectant (

), it is obvious that the risk of ice-crystal formation will

increase if the cells have not been exposed long enough to

cryoprotectant solutions. Consequently, the decrease in

the speed of cooling and rewarming, as observed with aseptic

devices, has to be compensated by higher intracellular

concentrations of cryoprotectant. As a consequence, aseptic

cooling, by which the embryos are shielded from liquid

nitrogen, may have an adverse effect on embryo survival

after warming if the embryos are not exposed sufficiently

to the cryoprotectants at the beginning of the procedure.

The initial aim of this study was to construct an aseptic

medical safety of vitrified human embryos. With the aim

parameters regarding the optimum cryoprotectant concentration

and the adequate exposure time to the different cryoprotectants

were studied. Finally, this study reports

further on the results of the clinical application of aseptic

vitrification of blastocysts originating from couples with

male and/or female factor infertility or from oocyte donors

and also after in-vitro maturation (IVM).

The development of an aseptic vitrification technique was

blastocysts that were not eligible for a fresh embryo transfer

or for ultra-rapid vitrification.

The embryo carrier device: the VitriSafe

device specifically designed for the study centre, based

on a modification of the open hemi-straw plug device (

which a small quantity of cryoprotectant (<1

the blastocysts can be deposited (

the biological material into liquid nitrogen, the VitriSafe is

France). Welding of both edges of the outer protective straw

took place before being plunged into liquid nitrogen. This

ensures a hermetic isolation of the sample. Under these conditions,

the cooling rate decreased from above 20,000C/

min to less than 1300C/min. Measurement of the cooling

rate was carried out between 20 and 120C with a very

For warming, the top of the outer straw is cut and the Vitri-

Safe device is removed without contact with the liquid

nitrogen. In order to achieve an ultra-rapid warming rate

of >20,000C/min, the tip of the gutter containing the biological

material is instantaneously immersed into the dilution

Solutions used for vitrification and dilution